keeping the pace on Beach Dr.
Originally uploaded by Southworth Sailor
My running the past decade has consisted of fitness runs about twice a week, usually between four and six miles. A couple of weeks ago my teaching/running partner proposed the idea of running a half marathon. We are usually not tempted by such torture activities, but since it was in our own backyard, we decided to go for it – finish the year out in style. (or at least in shape!) The 'Yukon Do It half marathon' course started at Manchester Park and followed Beach Drive into Port Orchard and back. I did one practice long run of eleven miles last week and decided I wouldn’t die at thirteen. This morning’s run was very cold, but there were a couple hundred other crazy people, so it didn’t feel so foolish. Don and I started at the back of the pack, so we could slowly pass runners – a great motivating strategy. The run went well, though I could feel Don’s faster pace drag me the last six miles. We crossed the line together at 1 hour 50 minutes, not enough to win any prizes, but respectable for a couple of 50+ers. We finished the morning off at the pancake house with Esther and Don’s daughter Chelsea, who documented the momentous event with her new camera. I’ll be happy to go back to my fitness running. Maybe the full marathon next year. We’ll have to think about that for a while!
Posted by Southworth Sailor at 9:18 PM No comments: Christmas 2010
Originally uploaded by Southworth Sailor
The past week has been filled with family celebrations; meals, gifts and more meals and gifts. Lynden once again was the host to both our extended family gatherings. Since the bulk of both our extended families are in Lynden, we are fortunate to have it all in the same town. My extended family all gathered at my nephew Aaron's house. Everyone was there except Jonathan who had to work in Illinois. A real treat was to meet Kate, Brian's fiance. It was strange not having Mom there and thinking of her alone at the Courtyard. The Eide family moved through the progression of traditional meals in a round robin on the compound. Bria was absent, but enjoying a Christmas in Norway. We all went to Bjorn and Jenny's church for a candlelight service. Back in Southworth, Bjorn, Jenny, Ada and Ellen are spending a few days with us.
Posted by Southworth Sailor at 10:20 AM No comments: 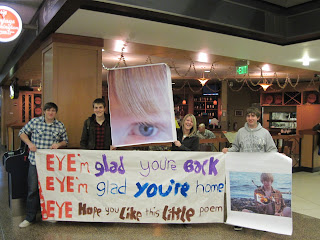 Calvin arrives in Seattle amid much fanfare
Originally uploaded by Southworth Sailor
I'm breaking my December blog silence with a report of a grand event. For most, the climax of December is the 25th, and rightly so. But this year it almost feels like yesterday was the climax. For months we have been anticipating the return of our 'a-wayward son' Yesterday afternoon Calvin arrived back in Seattle. A small welcoming committee gathered to greet him at the terminal. However, the one surprised was not Calvin but the welcoming crowd. Unbeknown to the gathering welcomers, Calvin had taken an earlier flight from Vancouver. He patiently waited in the shadows as friends gathered with posters and anticipation. As Esther and I joined the group, Calvin surprised us from behind, fifteen minutes before his plane was to arrive. He helped unroll his welcome home posters for the terminal to enjoy. An hour later, we were able to turn the surprise back to the traveler as Josh deLacy arrived from Michigan. The unusual poster and poem caught the curiosity of all who passed by. Josh and Calvin's friend, Alicia is never short of ideas. Calvin was craving Mexican food so four cars followed one GPS on a goose chase to a nearby Archie's Mexican Food.
Posted by Southworth Sailor at 10:04 AM No comments: