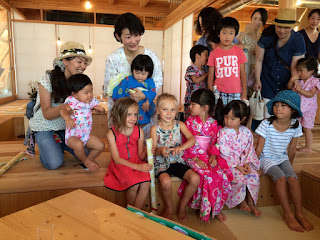 A beautiful morning greeted us; and while most of the party got a couple hours of morning sleep,  the girls and I took a walk in the quiet mountainside community.  After another great breakfast we were off on an art tour in the valley next door.  Japanese roads don't go over mountains; they go through mountains.  After just a short night together as newly weds Calvin and Sassa joined us.  Sassa's parents rented a twelve passenger van and brought us to several art museums and venues near their hometown of Tokamachi.  Every three years the valley takes a month in the summer to put on an art exhibition.  Tourists come from all over Japan to enjoy the exhibition.  Both of their parents are connected to the production of the tour, so they were eager to share the local talent.  We viewed forest exhibits, the world of dirt, a traditional mountain home and a modern art museum.  The highlight of the day was a surprise visit during lunch of preschoolers dressed in kimonos came to bring Sassa flowers and sing songs to Calvin and her.  The teacher was the same preschool teacher that Sassa had as a child.  They also sang Happy Birthday to Esther.  For our evening accommodations we are staying at a youth hostel.  The day ended with a visit to the local Hot Springs to experience Japanese bathing at its best;)
Posted by Southworth Sailor at 6:10 AM No comments: 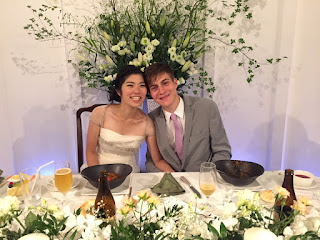 The momentous day began with a great breakfast at the pension.  Most of the morning was spent stringing paper cranes and prepping for wedding.  We moved to the venue around noon and continued to prepare programs and take wedding photos.  A quick rehearsal just before the guests arrived was just enough to get a few of our party a little worried.  The venue was perfect for the number of guests.  The bilingual service helped frame the union of our two families.  Pastor Rich did a good job presenting a Christian marriage.  The ceremony was simple and purposeful.  After the ceremony the guest left the room while the staff transformed the room for the reception.  Japanese receptions are a bit more formal with a lot of speeches and explanations.  The 'shoe game' presented by Steph and Jenny was particularly enjoyed by the Japanese contingent.    The meal was exquisite, comprised of ten courses each matched with a connection to Calvin and Sassa's relationship.  Every course was beautifully presented on a new set of unique china.  Dancing is usually not a part of Japanese weddings so the Bulthuis worm had to refrain themselves.  Calvin and Sassa left to catch a train for a quick overnighter before having to return as tour guides.  We returned to the pension and were joined by Sassa's family.

Meeting up with the in-laws 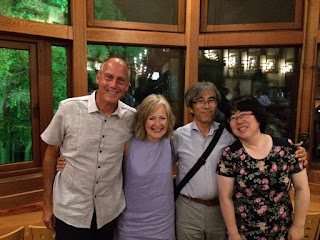 We said goodbye to Tokyo this morning as we packed up all of our things and caught a bullet train to Niigata prefecture.  A bullet train experience is not complete without a bento box and we were lucky enough to snag some before leaving Tokyo Station.  The Maruyamas (Sassa's parents) were there to greet us and welcome us to the scenic mountainous valley where the wedding will take place.  We piled in their two cars and a couple of taxis to the wedding venue.  We spent the rest of the afternoon helping prep for the wedding.  The Bulthuis' are getting pretty proficient at making origami cranes.  We even got an assembly line going.  The venue is wonderful.  The complex features open timber framing and windows.  We enjoyed a Japanese version of Italian food that was superb.  It was a pleasure spending time with our new in-laws though any meaningful communication needed to be channeled through Calvin and Sassa.  A bus from the pension where we are staying brought us up the foot of a mountain to our accommodations.   Tomorrow promises to be an eventful day.

Posted by Southworth Sailor at 2:51 PM No comments:

A Whale of a time in Tokyo 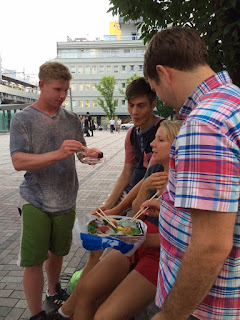 One of the features of Japanese culture that our family seems to enjoy is the unique architecture.  The Japanese are champions of simplicity and balance.  This morning we took a trip to the Edo-Tokyo Architectural Museum.  The museum has collected historic buildings from around the area and reconstructed them for visitors to explore.  We spent the morning taking our shoes off and on, exploring tatami rooms and beautiful woodwork.  We ate a lunch of Udon at the museum.  In the afternoon, I took Ruby and Ada back to Fuchu to play in the house and swim in the pool at the church.  The alternate activity fit the girls fancy well and they nodded peacefully off to sleep at a decent hour.  The rest of the gang spent the afternoon and evening on a final Tokyo adventure.  Ueno Park is a vast inner-city park with a zoo, temples, museums and an extensive lake filled with lily pads.  After wandering through the park, the crew did some shopping at the nearby Yuniqlo store. Some of the more brave of the party pretended to enjoy eating a snack of whale meat.  They next went to a geek's paradise, including the largest electronics store in the world where the  weary tourist enjoyed Okonaniyaia on the 8th floor.  The evening was capped off with a jamb packed train ride at 9:00.

Posted by Southworth Sailor at 5:16 PM No comments: 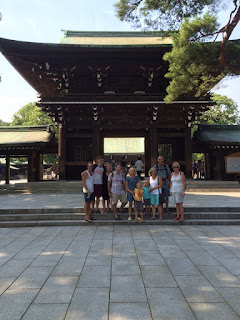 Hot muggy weather does not invite sightseeing especially to the tune of fifteen miles.  After quick breakfasts we walked to ICU campus.  I stayed with the girls in the cool cafeteria while Calvin gave a quick tour.  Once again we were struck by the beauty of the grounds.  Next we caught a bus and then trains to Meiji Shinto shrine.  Large trees helped give some shade to our walk through the grounds.  Ruby in particular was irritated by the direct sunlight.  After some yogurt cones we wandered through several shopping areas, stopping occasionally to make purchases.  Ada did wonderful through the long hot afternoon, but Ruby had a little too much and began to melt down and embody the weariness that most of us felt.  We eventually made our way on foot to Shibuya station for a look at Hachi the dog and a long anticipated bowl of Ramen.  As we squeezed into trains on our homeward journey, both girls fell asleep in someone's arms.  We collapsed into our lodgings at about 10.  Josh deLacy dropped in after returning from his hike up Mt. Fuji.


Posted by Southworth Sailor at 2:35 AM No comments: 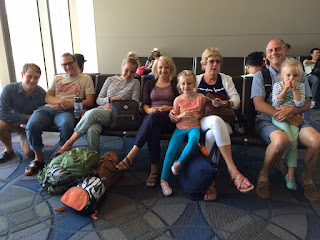 Our long convoluted journey to Tokyo ended in midnight arrival and collapsed exhaustion.  It started with a 3:30am get up in Lynden.  Bria and David accompanied our small caravan to the Vancouver BC airport, as they returned our vehicles to Lynden.  A morning flight brought us to Los Angeles at about noon.  We met Markus and Steph for our next leg.  Steph was feeling a little better from her stomach ailment, but was clearly suffering.  After a four hour layover it was on to a twelve hour flight to Japan.  Ada and Ruby did great considering the length of the flight.  We were all exhausted from trying to sleep in a cramped airplane seat.  Calvin and Sassa were at Narita to welcome us to Japan at about 8 o'clock.  Our last task of the trip was to drag nine exhausted bodies and eleven bags of luggage through trains and train stations for two hours.  After 28 hours of traveling, we were ready for some sleep.  We are housed at two locations:  Markus, Steph, Esther and I are sleeping in Calvin's apartment; and Ellen, Calvin, Bjorn, Jenny and the girls are staying at the church's guest house.  Pastor Rich and wife Candice are generous hosts.
Posted by Southworth Sailor at 2:26 AM No comments: 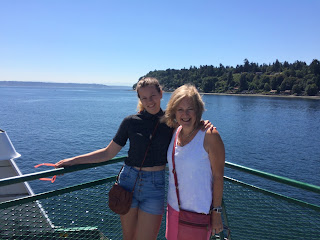 The past couple of days we have had the privilege of hosting Esther's second cousin, Christina Andersen from Norway.  She spent the last month in the US visiting family, most recently helping to babysit our granddaughters in Corvallis.  Christina is a charming young lady who is very personable. It was a pleasure reacquainting ourselves with our Norwegian family.  We spent a day visiting the Seattle sites and spending a few hours with George and Kirsten Eide.  Christina was very excited to see her great uncle and aunt.  I think she was a little relieved to be speaking some live Norwegian after a couple of weeks of only English speakers.  She returns to Norway today.  We hope to see her again soon.
Posted by Southworth Sailor at 9:00 AM No comments: 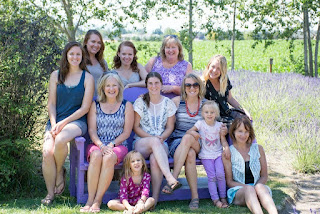 The past 4th of July weekend began with the Eide and Bulthuis women congregating in Southworth for an overnighter before a day trip to Sequim.  They converged from Lynden, Seattle and Corvallis.  The ladies did the lavender rounds at four farms, stockpiling fragrant goodies for another year.  Meanwhile the Bulthuis boys minus yours truly had a bachelor party day, hiking and enjoying a Freemont made dinner.  On Saturday the Bulthuis family all came to Southworth to celebrate the Fourth and say good-bye to Calvin.  The evening was capped off with a trip to Olson shindig  and some impressive Bulthuis dancing.  Bjorn, Jenny and the girls left Sunday morning to pick up Christina from Anna's on their way to Oregon.  Markus and Steph spent the day with us as we encouraged Calvin in his packing preparations.  On Monday, Esther and I took Calvin to the airport early in the morning and said good-bye as he embarks on a Japanese life for a couple of years.  It wasn't too hard because we will see him in a matter of weeks.  Since we were in Seattle, Esther and I did some Japan trip shopping and even score on a dress for her to wear to the wedding.
Posted by Southworth Sailor at 11:34 PM No comments: