picnic supper at Blake Island
Originally uploaded by Southworth Sailor
Esther and I had an active weekend doing a couple of recreational day trips. On Saturday, we dusted off the canoe and paddled to Blake Island, hiking around the Island and taking supper on the spit. While hiking we noticed the sky clouding up, and by the time we started back in the canoe, a storm was brewing. Fortunately, we were paddling with the wind and we made a quick passage back to Southworth. After seeing Calvin off to camp early Sunday afternoon, we decided to find a bike trail to explore. Given the heat, we wanted something shady. We found just the ticket with the Woodard Bay trail in North Thurston. Almost the entire trail was in the shade. Ordinarily, this wouldn't be our favorite, but it was just right for a hot afternoon.
Posted by Southworth Sailor at 9:17 AM No comments: Ellen and Esther at Bremerton Harborside Park
Originally uploaded by Southworth Sailor
My sister Ellen stopped by for a day in Southworth on her way up to Lynden. She drove up from Sacramento in her new Mitsubishi Eclipse. We enjoyed hearing about her recent trip to a Hillcrest reunion (our childhood African boarding school) Ellen also gave us an update on our Chicago relatives. Jack and Sue also dropped by for lunch on their way home from a week in Sequim.
Posted by Southworth Sailor at 9:12 AM No comments: Markus' Birthday
Originally uploaded by Southworth Sailor
Twenty-two and counting. Having had an eventful weekend with friends at a cabin near Arlington, and last week at the Shakespeare Festival, Markus chose to have a lay low birthday today. We did go to Spiros for supper and had the customary oreo ice cream for dessert.
Posted by Southworth Sailor at 8:26 PM No comments: Crater Lake
Originally uploaded by Southworth Sailor
We had a great week in Southern Oregon. The performances at the Shakespeare Festival were great. I think that I enjoyed 'Much Ado About Nothing' a little better than 'Henry VIII' I understood more of the lines. But both were good. We had better seats for 'Much Ado'; so that may have made a difference. I feel like i just took a crash refresher course in Shakespeare and English history as I read a lot of background material this past week. The bummer of the trip was when Esther lost her camera in Ashland. She must have set it down somewhere in a shop. After scouring the town for an hour, we gave up. Consequently, we don't have any pictures of Ashland. The theater didn't allow any photography, so all our pictures were of the town. The weather was very hot; so it was uncomfortable during the day, but just right at 8:30 pm - show time. We managed to squeeze a disgolf game in one morning at a primitive course with poles and tin cans. On the way home, we went to Crater Lake which was beautiful. The temperature was just right and the lake was an amazing blue color. This weekend Markus and Calvin are both with friends, so Esther and I are alone.
Posted by Southworth Sailor at 8:32 PM 1 comment:

Off to the Oregon Shakespeare Festival 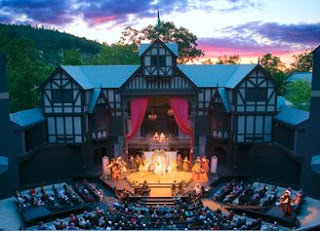 Some parents get dragged to monster truck rallies or rock concerts to connect with their sons; we get to attend Elizabethan theaters to watch Shakespeare plays. Calvin and Markus, along with Esther and I will spend the next few days in Ashland, Oregon at the Shakespeare Festival. We have tickets for 'Much Ado About Nothing' and 'Henry VIII.' Markus read Much Ado this past quarter in a Shakespeare class, so he can keep us from becoming too confused. We leave early tomorrow to make the evening play, but not without a stop at Powell's Books in Portland.
Posted by Southworth Sailor at 7:46 PM 1 comment: ladies in lavendar
Originally uploaded by Southworth Sailor
My apologies for the interruption in blog service. You might have experienced difficulty accessing the site this week. My domain URL expired and Bjorn had to patch me up again.

Jenny and Ada have been in Southworth the last few days as there is a wedding nearby that Jenny and Bjorn are attending. Yesterday, we went to Sequim for an early lavender bash. (The festival isn't until next weekend.) I rode my bike on the discovery trail, while Jenny, Esther and Ada searched for blooming lavender. Ada did a great job of humoring her farmor by pretending that she enjoyed the lavender. She is growing so fast; she amazes her grandparents with her intelligence and athleticism. On a different note, Calvin returned from a week at Miracle Ranch where he was trained as a counselor. He will work at the camp for a couple of weeks this summer.
Posted by Southworth Sailor at 9:13 PM No comments: Hurricane Hill on the 4th
Originally uploaded by Southworth Sailor
We took a family hike on the Fourth. We didn't want a long hike, because we wanted to catch the Paul Olson bash in the evening. Hurricane Ridge is a bit of a drive, but it puts you in the high country before you even start hiking. We enjoyed a leisurely walk up to Hurricane Hill (about 3 miles round trip) Conditions were fantastic and the views were great. The Ridge was packed with tourists, every other party was speaking a different language. It always amazes me how many out of state tourists visit Olympic National Park. I am told that it is in the top five national parks in the country for annual visitors. The Olson party in the evening had an added musical dimension as there was a continuous concert all afternoon and evening.
Posted by Southworth Sailor at 8:37 PM 1 comment: Esther and Ada
Originally uploaded by Southworth Sailor
While the boys and I poured cement and redid roofs, Esther enjoyed a week in Lynden. She relished her time with all of the family, but especially her Ada time. The two of them did a lot of napping together and taking walks on the compound. Esther went up with Sherri Nelson who also got to spend time with her Lynden connection (Rob and Julie).
Posted by Southworth Sailor at 9:22 PM No comments: