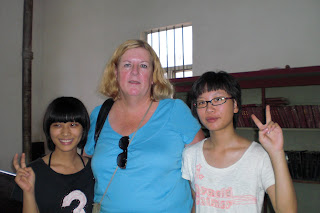 Bulthuis picnic at Birch Bay
Originally uploaded by Southworth Sailor
We spent this past weekend in Lynden doing some prep work on the Van Dyk Rd so Bjorn and Jenny can move into Esther's parents former house. It involved getting rid of the last of the furniture and repairing a vinyl floor. At the same time, we got to see my sister, Ellen who went to China this summer to teach English. She had a great time and wants to go back. The Bulthuis family (my mom, siblings and spouses as well as nephew Aaron and family) had a picnic at Birch Bay. It was a nice evening at the state park and we enjoyed views of the bay and Canadian mountains and an evening campfire. We also got to spend some time with Esther's family. Bjorn and Jenny came back from Mexico and Esther and I went back to school today. Another summer is over!
Posted by Southworth Sailor at 9:29 PM No comments: gas works park
Originally uploaded by Southworth Sailor
We always say that we should take our bikes on the ferry and ride all the way into Seattle. Well, today we did it. Esther and I took a morning ferry over to Fauntleroy, then biked along the Beach Drive to Alki Beach where we enjoyed fish and chips (well oysters and chips in the case of Esther). Refueled, we went on around Elliot Bay to the Seattle waterfront. Taking a detour around Hempfest (which was set up at SAM sculpture park), we went around the east side of Queen Anne to SPU and Fremont. We decided to push it a little further and go on to gas works park before turning around. On the way back we went around the east side of Queen Anne and through some back streets downtown to get back to the waterfront and retrace our route back around Alki to the ferry, stopping again at Alki for supper. The nice thing about this route is that it is pretty much flat the whole way. I don't have an odometer, but I'm guessing that we rode between 30 and 40 miles. We both have sore rears. Well done, Esther!
Posted by Southworth Sailor at 9:31 PM 1 comment:

Big Wedding for the Little Man Frank and Sheri Carlson
Originally uploaded by Southworth Sailor
Our friends Frank Carlson and Sheri Hitch were married this afternoon despite a downpour of rain. Frank has been a bachelor all these years, patiently waiting for the Lord to give him a partner. Sheri is a gracious loving woman who is basking in Frank's affection. The outside wedding was attended by about three hundred guests. The weather was precarious, and just as the ceremony started, it began to rain (hard). The joy of the moment overshadowed the discomfort. Frank could not resist the opportunity for the spectacular as a team of vikings delivered Sheri's ring in a treasure chest. A picnic complete with roast pig finished the festivities. Fortunately, it stopped raining.
Posted by Southworth Sailor at 8:37 PM 1 comment: In the morning, we did some last minute shopping. Key West shopping has changed since we were here six years ago. Last time it was filled with tourist trinket shops, all with seemingly the same inventory. Now there are more galleries and upscale specialty shops. We headed out of the Conch Republic late morning bound for Key Largo and the snorkel tour at John Pennekamp State Park. We both enjoyed the snorkel tour very much. It was a somewhat rough day on the waters, so they took us to a reef about five miles off shore. We snorkeled for an hour or so just inside the reef. The coral and variety of fish were amazing. It felt like we were swimming in a giant aquarium filled with beautiful fish. We cleaned up at the campground showers as we decided to forgo a motel for the night and spend another glorious night in the Miami airport. Our flight left at 7am, so it didn't make much sense to get a room for a couple of hours, just to get up at 3am, bring the rental car back and get to the airport. We chose a spot about ten feet away from our last 'carpet suite' and caught a little shut eye between interruptions. The flight home was direct and we were in Seattle by 10am.
Posted by Southworth Sailor at 1:00 PM No comments: Despite the heat, we decided to rent bicycles to get around Key West. Mopeds and electric cars are also very popular rental items. In the morning, we took a long ride all the way around the key. We got a little overheated, but refreshed ourselves at Camille's restaurant, a funky local favorite. Then it was off to rent a sailboat for an hour. I wanted to rent their Hobie 16, but they were a little lazy, since it wasn't rigged yet; so they talked us into the Hobie 14. It was fun to be on the warm water. Hobie sailing is definitely a wet experience, so it is obviously not a Puget Sound favorite. Esther enjoyed laying on the trampoline and getting splashed with warm water. In the evening it was back down to Mallory Square to enjoy the sunset. Tomorrow, we head back to Miami.
Posted by Southworth Sailor at 4:54 AM No comments: After a long night of sleep in air conditioning, we started down the Keys. We stopped in Key Largo at Pennekamp State Park and reserved a snorkel tour for our return trip. We were amazed at the traffic in the upper Keys, mostly coming out. There were lots of pickups pulling fishing boats; must be some kind of season opening this week. We arrived in Key West mid-afternoon and checked into the Chelsea House, an old historic house turned hotel-very cozy and right in the middle of things. Town is packed with tourists, despite it being off season. There are many Europeans as well as those from the Midwest and Northeast. Everyone heads for Mallory Square at sunset, which was pretty much a dud tonight. The town parties until 4am, but we turned in at 10pm.
Posted by Southworth Sailor at 5:23 AM No comments: Ah, the joys of travel in Haiti! We checked in early at the Les Cayes airport and waited a couple of hours. It was hard to say goodbye to the RMI missionaries and staff. They make so much effort to make our stay a pleasant one. We are able to have these trips only because these people believe in the importance of this ministry and sacrifice their comforts to make it happen. Check them out at http://www.rminet.org/ Once we got to Port au Prince the fun began: Keeping track of bags while being hounded by porters, standing in endless lines, going through security three times, handing your passport over five times. The three hour ordeal ended successfully, with all people and baggage aboard. We are now safely in Florida, spending the night in Homestead; and tomorrow Esther and I embark on our adventure in the Keys.
Posted by Southworth Sailor at 7:28 PM No comments: The retreat center at Zanglais is a mini-resort on the Caribbean. We had the morning to relax, go for a swim and soak in the scene. In the afternoon, we drove back to the mission station and did some shopping with traders and enjoyed shrimp at Billy and Debbie's home overlooking the valley. It was fun getting to know their daughters: Savannah and Mckena, who so much remind me of my MK days. It was also Esther's birthday and they made a special cake for the occasion. We turned in early at the guest house as we need another early start tomorrow.
Posted by Southworth Sailor at 7:19 PM No comments: It was an early departure from Les Irois. We were awakened especially early by Billy's pots and pans alarm. It didn't take us long to get loaded up. About thirty people were there to send us off, including the choir. Forming a circle of prayer, it soon became an emotional experience. I rode with Billy for the first half of the trip to Jeremie, gleaning info about the coastal culture of the towns we drove through. We stopped in Don Marie at the sister church to help a pastor move to a new church. Our flight from Jeremie to Les Cayas went well, flying over the mountains and saving a 60 mile, seven hour road trip. By the way, I think I forgot to describe the roads-conditions range from cement pavement in some towns to gully rutted trails only passable in 4 wheel drive. These Toyota trucks take a beating - about the only thing you do see in the road. The Les Cayes airport is nice by Haitian standards. After a short stop at the mission station, we went out to the retreat center and a swim in the surf. Supper was fried chicken and mashed potatoes. After supper we had the week's debrief session in the gazebo. I shared how special it is for me to be here with Esther. The experience is so Africa like, it feels like I am sharing my childhood with her.
Posted by Southworth Sailor at 7:00 PM No comments: Breakfast was spaghetti and bananas-not too many takers this morning The morning's seminar was on communication The material was quite detailed which made us skeptical about whether the Haitians could process it. The breakout session was in pairs as couples and seemed to go well. An interruption in our morning turned out to be the highlight of the day. Our sponsor child brought his family to see us. They had walked an hour from their home to see us, all in their Sunday best. David brought his mother and father,as well as his younger brother and sister. We learned that his father did live with the family, that they were active members of one of the satellite churches. We also learned that his brother and sister attend the school as well, but are not sponsored. The whole family was very appreciative for our sponsorship and gifts. It has been over eight years of our relationship, and it's pretty overwhelming to think that we have mutually been praying for each other all these years. Needless to say it was an emotional time. They gave us pineapples and mangos as gifts. When we got back to the seminar, they were renewing the wedding vows. Esther mistakenly called me Mike, which the team has got a hold of and will not let her forget. In the afternoon, the ladies had their 'tea' Cindee shared her testimony, and our ladies served the Haitian ladies, which was a switch. We took another walk in town with Jules, looking for the furniture shop of Mark and Joni's sponsor child. The send off meeting was in the evening. At first it seemed that no one would show up, but after blaring music for a while, the church slowly began to fill up.. The singing was especially expressive and Billy got them worked up with his Nah, Nah, Nah song.
Posted by Southworth Sailor at 6:43 PM No comments: