A visit from the granddaughters 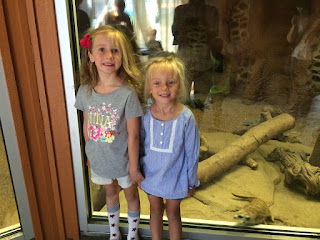 A summer is not complete without Ada and Ruby spending a few days with Papa and Farmor.  Since school starts late this year, I had a few weeks before responsibilities started.  Esther has been slaving away for most of August.  I drove down to Portland to rendezvous with Jenny Tuesday morning and brought them back on Friday morning.  Esther tried to make the most of the evenings with the girls.  Wednesday I spent most of the day in Southworth, at the beach and in the yard, enjoying one of the last beautiful days of summer.  On Thursday I took the girls to the Point Defiance Zoo.  The girls really enjoyed it and we spent the whole day there.  My favorite was the polar bear feeding inches from our heads (separated by glass of course).  Ada's favorite was the snow leopard cubs and Ruby's was the elephant.  The girls spent the nights in their 'new bedroom'.  I set up bunk beds in one of the basement rooms.  They were tickled to take ownership of the room and help do some decorating.  We enjoyed their company and were missing them as soon as they left.  Ada stated that it needs to be a summer tradition to spend time in Southworth.  I think it already is.

Posted by Southworth Sailor at 8:49 PM