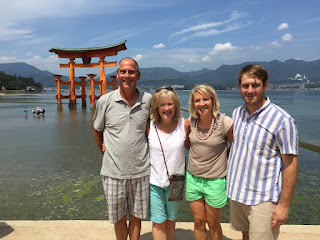 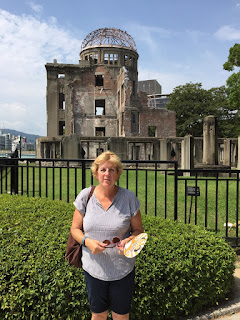 This being the last full day in Japan we were determined to get the most of it.  Hiroshima and Miyajima were on the definite bucket list for Ellen and Jenny.  Calvin and Sassa took the girls for the day because the marathon day would be too much.  The newlyweds took the girls to the Osaka aquarium.  Calvin and Sassa had not been there yet, so it was something new to them as well.  The highlight for the girls was the penguins and sea otters. Meanwhile, the five of us ventured out without our faithful tour guides.  Sassa gave us a detailed itinerary and Calvin let Bjorn borrow his Japanese iPhone-We were in business.  The hour and a half bullet train ride brought us to our southern destinations.  Miyajima is a postcard island with the iconic Torii Gate standing in the water next to a Shinto shrine stilted in the tidelands.  We took a ferry to the island and were  immediately struck by the abundance of 'foreign' tourists.  Esther was delighted with several oysters snacks, and we waded into the cool water avoiding jellyfish.  After lunch we returned to Hiroshima and Peace Memorial Park.  Ellen and Jenny said that it was well worth the effort and one of their highlights.  Being at the Memorial one day after the seventieth anniversary of the bombing made the experience seem very fresh with residual crowds and the dismantling of the ceremonial pavilion. Putting faces and names to the 140,000 victims of the bombing was very sobering. The Children's Memorial with the millions of cranes choked us all up. We worked up an appetite walking in the afternoon heat to enjoy some much anticipated Okonamiyaki at three floors of mini restaurants that all serve the famous Hiroshima dish.  Chefs grill the dish in front of customers.  We sped walked on full stomachs to the train station and caught an evening bullet train back to Kyoto.  It was a bittersweet evening spending our last night with Calvin and Sassa.
Posted by Southworth Sailor at 5:49 AM